SCUT’s VHDL course is teached in English. Therefore, most of this note will be in English. In case you misunderstand some important part, I’ll stress those part in Chinese.

Here is a breif introdution about VHDL, it’s a presentation from a Intel engineer. You can check it here 👉 https://youtu.be/zm-RA6BsYmc

One more thing, the textbook used in class is in Chinese, and I found an English one called Free Range VHDL. Most of my English note is base on this book

Here are some terms you should know about VHDL.

VHDL is a HDL (Hardware Description Language), which is a software programming language htat is used to model a piece of hardware.

There is two ways to do modeling with HDL, one is Behavior Modeling, and the other is Structural Modeling.

Register Transfer Level (RTL) is a type of behavioral modeling, for the purpose of synthesis. With RTL, the design is described in terms of register stages with comet or blocks of logic between them.

Synthesis is a the act of translating this text-based HDL into a circuit and then optimizing that circuit.

Process is the basic unit of execution in VHDL.

Structural Modeling, unlike behavioral modeling, specifies the functionality a circuit, but it goes further and calls out specific hardware implementation, including building blocks and their connections.

During RTL synthesis, code is analyzed and equivalent logic structures are generated.

In the upper left of the picture below, you can see a process block with a case statement inside infering a four input MUX. 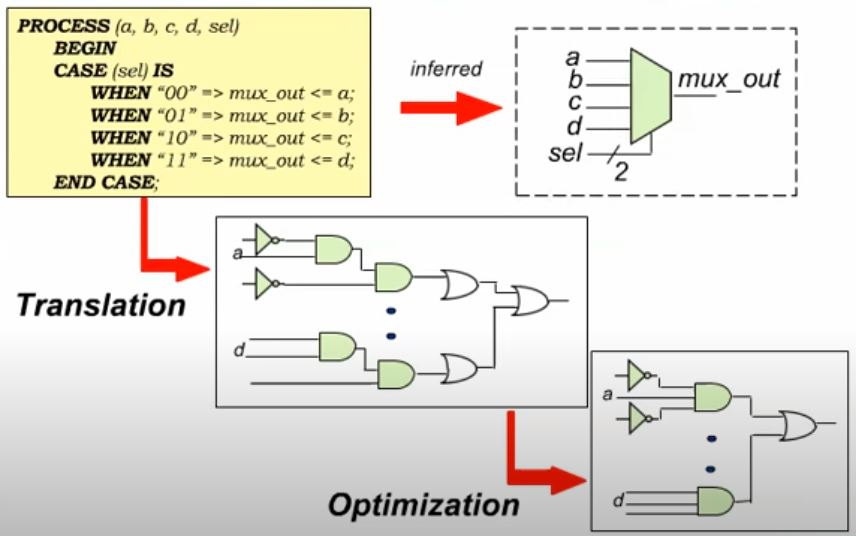 During translation step, the synthesis tool directly translate the HDL code in a gate implementation.

During optimization step, the synthesis tool then tries to improve the logic by making it smaller or faster. For example, to make the logic smaller, it may try to remove redundant logic, or to make it faster, it may try adding some parallel structures to it. 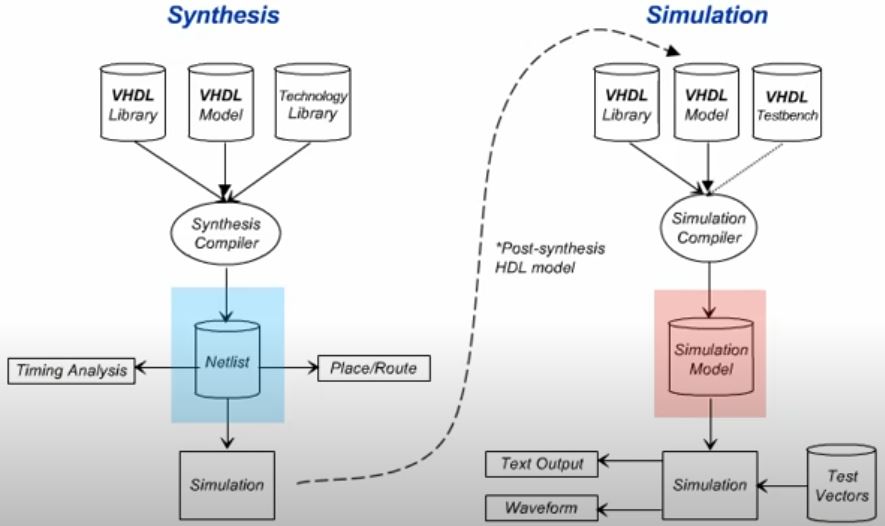 On the right, the simulation compiler take your VHDL code to create a simulator-specific simulation model, and then execute simulation on this model. Using this model allows a simulator to perform faster simulations than if it was tring read the code line by line.

During the simulation, the tool takes any test factors or stimulus provided by you and produces output waveform or text file that can be used to verify proper operation. As an alternative, you can also write your simulation stimulus using a generic VHDL code called a test bench. The test bench gets compiled along with the design, so that the stimulus is also in the compiled simulation model. The advantage of the test bench is that your stimulus is portable just like the design files, so you do not need to provide simulator specific test factors when you execute your simulation.

In the simulation flows, there’s no mention of hardware or target architecture. This is because the simulator just execute code as it is written. In a sense, it really does not care where the design is going as it is only concerned about interpreting the functional description by your VHDL code.

On the left, the synthesis compiler take the same VHDL design to produce a synthesized netlist. This netlist is yourdesign translaed into the primitives that make up the target a hardware architecture. Notes that a technology library was used. Every FPGA family has a different library that the synthesis tool use to map a design to its specific architecture. Using the generated synthesized netlist, the design can be placed and routed in the actual target device.

VHDL is made up of reserved keyword like C, and it’s not case-sensitive. Evey VHDL statement must be terminated by a semicolon (;) with spaces used for readability which are ignored.

Comments can be added to the end of the line with a double dash (--) preceding it, or a comment block by preceding the comment with /* and ending them with */ similr to C.

VHDL has four design units, which are:

Here is the basic structure for an entity declaration.

you can close the entity in one of 3 ways:

The port declaration is used to declare i/o to your entity and occurs within the entity declaration after the generic declaration.

The last port declaration is not followed by a semicolon.

Generics are values that could be passed into an entity at compilation time. We use them to make our entities parameterizable when designing hierarchically. We use the keyword GENERIC and within parentheses lists the generics.

You can declare multiple generics in one line if they are the same type and initial value.

When coding an architecture, there are two methods that can be used:

Similar to the entity block, the architecture can be terminated with several different methods depending on the version of VHDL.

If you have multiple architecture for the same entity, then the name must be different. However, architecrue for the different entity can have the same name.

The local identifiers that you use inside the architecture are not ports of generics must be delared in the architecture declaration section before they can be used in the design. In the example, we see that we have a CONSTANT, a SIGNAL, and an enumerated data type.

After the architecture declaration section, you have the keyword BEGIN followed by the architecture body, which contains the executable lines of code within hte design made up of various typese of processes. And your architecture ends with the line END ARCHITECTURE <architecture_name>;

Configuration unit is used to associate an entity to an architecture.

Configuration can also be used to associate an instance to another entity-architecture (component) hierrchically.

Packages are a convenient way of storing and using information throughout an entire model.

A LIBRARY is a directory that contains a package or a collection of packages. They are essentially directories where your packages are located.

VHDL have two types of libraries:

To reference a package requires 2 clauses:

Work and STD library is considered implicit libraries and do not need to be explicitly called out by your design.

Here is an example.